Renowned Economist Peter Ricchiuti to Present 2016 Market Outlook: What the Financial Markets Are Telling Us

I am so pleased to announce that Peter Ricchiuti will speak to Bridgeworth’s clients February 18th at 6 pm. The event will be held at Samford’s Brock School of Business.  Peter is the Assistant Dean at Tulane University’s A.B. Freeman School of Business and a highly regarded economics speaker. He has addressed over a 1000 groups in 47 states. Peter previously spoke to our clients in 2009 at a time when the economy and markets appeared to be in a free fall. Peter’s insight was well received by our clients. Given the current state of the markets and conflicting economic signals we are looking forward to Peter sharing his perspective and knowledge with our clients.

People have described Peter as the professor you wished you had. I am proud to say Peter was one of my professors at Tulane. Of all my professors Peter has made the greatest impact on my career. As a student in his class I never wanted to miss a day. Furthermore, his love for the markets and the economy was infectious. While attending his class I developed a similar passion for investments and decided that I eventually wanted a career in this business. Peter’s style of teaching is full of information, energy, and humor. He is the best at explaining the markets in a way where even a novice understands the information and enjoys every minute of learning.   During a recent family trip to Tulane’s Homecoming, many alumni attended an economic presentation presented by Peter at Tulane’s business school. I know what you are saying, “who goes to their University’s football homecoming and takes their kids to hear a business school professor speak about the economy?” Well we do at Tulane…… especially when the professor is Peter Ricchiuti.  The information was extremely valuable and my kids still mention it as one of the best events of that weekend.

Peter has been very supportive of my wife (she was also one of his students) and me throughout our careers. We are lucky to call him our favorite and most influential professor.  I hope you will make every effort to attend this event.  During this time of uncertainty, you will leave the event with a clearer understanding regarding the current state of economy and markets while saying to yourself  “I wish I had that guy as my professor when I was in college”. 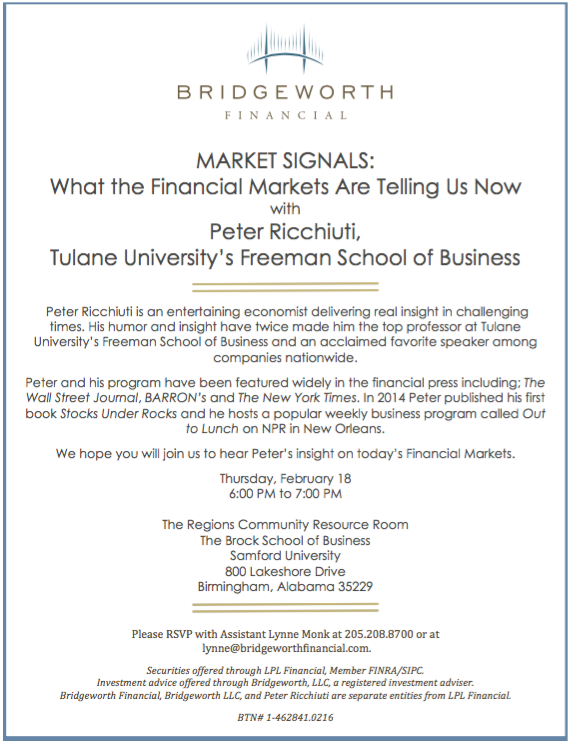 Our Huntsville Office is moving. Starting October 24th, this office will be working remotely. Please contact your advisor for more information.