The overall positive returns in the stock markets continued despite the negative returns that occurred during the last week of the quarter, as fears of a debt default by Greece weighed on the markets. The U.S. stock market has experienced a bit of deja vu this first half of the year with climate factors affecting earnings, just like last year. Other factors, such as the U.S. dollar strengthening and oil prices remaining low, have also dampened the enthusiasm of short-term market participants. Despite these headwinds, the U.S. The stock market has continued to hold its ground. Investors look for the U.S. to return to a more robust growth rate than was seen in the first two quarters, and there are signs that this may be achievable. These same positive signs, such as a strengthening job market and increasing wage pressure, are also being closely watched by the Federal Reserve, as it attempts to exit its zero interest rate policy. Originally intended to be an “extraordinary” measure, this current low interest rate policy is now viewed by many as “ordinary”. Most believe that we will see a small interest rate increase later this year, and the Federal Reserve’s guidance shows that future rate increases will be “data dependent”, possibly even more modest than previously telegraphed. Disruption overseas may influence and delay the Fed’s decision which, in turn, has implications for all markets around the globe.

The most interesting lesson of the first half of the year is that diversification is back, (meaning the benefit of spreading portfolio risks across many different types of investments is once again evident). We say this slightly with tongue in cheek as diversification “worked” in 2014, just not in a way that added to returns. Returns in 2014 were definitely differentiated and continue to be in 2015, but this time with more positive results. So far this year, even with the recent Greek woes, the developed international and emerging market stock indices have outpaced the S&P 500, which dominated the past few years. Below is a summary of recent performance of some of the major market indices. 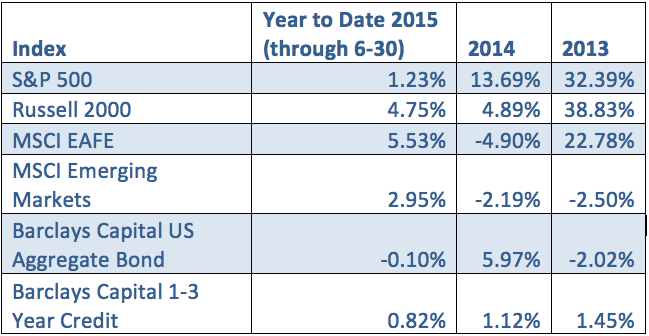 U.S. Stocks: The same major themes of the past several months are still in place. The S&P 500 is trading at a forward valuation (Price/Earnings Ratio) of 16.4, which is above the historic average, but not overly expensive given the low interest rate environment. While the market is up 205% since the lows in 2009, the earnings picture has remained positive. With the backdrop of a pretty strong U.S. economy, modest earnings, but facing some headwinds due to the strong dollar, and price pressure due to valuations being above historical levels, we still feel like U.S. stocks offer a reasonable risk/reward tradeoff. With the Federal Reserve staying fairly dovish and central banks around the world easing monetary policy, returns may keep progressing at approximately the rate of earnings growth, which we expect to be in the mid- to low-single digits. Of course, as the events of the past few weeks have reminded us, political and economic decisions by others can change the sentiment of investors, causing markets to be volatile. Additionally there is always also the potential for a surprise of some sort, like the Fed raising rates faster or more than expected. One “change” that has occurred over the past year, and continues to this day, is the large divergence between different sectors of the market, particularly with Energy having been a large detractor. As we look forward, we do expect continued discrepancies in growth across different sectors of the market. Year-to-date through June 30th, the S&P 500 ended up 1.23%, while the smaller U.S. companies represented by the Russell 2000 ended up 4.75%.

International Stocks: Optimism overseas has started to take root as markets have responded to stimulus provided by central banks around the world (the European Central Bank and the Bank of Japan, in particular). While most agree that Europe and Japan have plenty of structural issues that may continue to hinder them over the long-term, these markets currently benefit from relatively attractive valuations, cheaper currencies, lower energy costs, and an influx of cheap money (due to low interest rates). This environment can be pretty beneficial for stocks; however, the biggest “variable” in the European equation today is Greece, who is desperately struggling in a negative feedback loop of negative growth, high unemployment, low tax receipts; made even worse by an inadequate system of tax collection and a huge debt. The challenges of fixing this problem are large, especially considering the medicine to cure it is particularly bitter to most Greeks. All options they face, including leaving the European Union, are not going to be easy. There is some concern that a “Greek exit” could set a precedent for other countries that might face similar debt problems in the future. However, keep in mind that Greece is a very tiny country; the pure dollar amount of this issue is relatively small ($242B) and the European Union (EU) is in a much better position to deal with this today than in 2011 or 2012. The real issue for the global financial markets is a philosophical one: if Greece exits, this undermines the European Union and makes its future less certain. The EAFE Index ended the quarter up 5.53% year-to-date.

Emerging Market Stocks: The theme of divergence is especially true in the “emerging markets” which includes less developed nations such as China, India, Brazil, Russia, Mexico and others. It should be no surprise that each of these countries has its own issues and opportunities, and companies domiciled in these countries likewise have very different opportunities and risks. As a whole, emerging market stocks are priced very attractively, with growth rates expected to be far higher than anywhere else in the world. We have seen positive signs thus far this year, but markets are tempered by some fear of the U.S. raising rates and the negative effects that this can have on these emerging countries. That said, many (but not all) emerging countries do benefit strongly from a recovering Europe and from lower energy costs. The other big variable that many are watching is Chinese growth. China is trying to transition its economy away from heavy manufacturing and export oriented and, as a result, will experience bumps along the way. How well it can intervene to stabilize its growth is the main question. The MSCI Emerging Market Index ended the quarter up 2.95% year-to-date.

Bonds: The Federal Reserve only controls short-term interest rates, but its effects can be felt through all maturity ranges, although not equally across all bond types or maturities. We have been planning for a rate increase for a while now and are hopeful that most of the information is “priced” into the market today, but must wait for confirmation of this when the first hike is initiated. Foreign bonds have also experienced some volatility lately, as economic data has been improving in many markets, but interest rate policies from country to country are very different. The real question that everyone is focused on is less about when the Fed raises rates, but more about the path and speed of subsequent rate increases. The Fed’s estimates currently are projecting a faster pace than market participants truly expect; so, if the market is wrong, there could be some negative reaction as the markets adjust to that reality. The municipal market has had strengthening fundamentals, but headlines from troubled municipalities like Chicago and, most notably, Puerto Rico have tempered enthusiasm and kept yields higher. Credit research is more important than ever in the municipal bond market. The Barclay’s Aggregate bond index was down, -0.10%, the Barclay’s 1-3 Yr. Credit finished up 0.82%, and the S&P National AMT-free Muni index was down, -0.10%.

Diversifying Strategies: This group of investment managers is tasked with generating risk-adjusted returns that are differentiated from the traditional stocks and bonds in which we primarily invest. In general, the environment for Diversifying Strategies’ managers is shaping up to be pretty attractive as valuations are high in many asset classes (stocks and bonds), with different sectors of the market facing real and persistent headwinds and tailwinds. Additionally, when interest rates start to increase in the U.S., the many different asset types will each be affected differently. However, all of the management styles within Diversifying Strategies involve a certain level of contrarian activity, buying things that others are selling and vice versa, and it often takes a little while for the majority opinion to shift in favor of the fundamentals. For this reason, we evaluate each of these managers based on their peer group and remain patient to see their strategies take effect.

While U.S. politics, Greece’s woes, falling oil, and a whole host of other issues currently dominate the headlines, we believe that many of these risks are similar to those of the past and that the thoughtful and careful construction of a globally diversified portfolio continues to be the prudent answer. While watching intently as world events play out, we will stick to our guiding principles and processes in making investment decisions for our clients.

We appreciate your trust in us as your valued partner in working towards your goals. Please let us know if you need anything.
Zach Ivey, CFA, CFP®
Chief Investment Strategist

This commentary is provided for information purposes only and does not pertain to any security product or service and is not an offer or solicitation of an offer to buy or sell any product or service. Any opinions expressed are based on our interpretation of the data available to us at the time of the original publication of the report. These opinions are subject to change at any time without notice. Bridgeworth, LLC does not undertake to advise you of any changes in the views expressed herein. Unless otherwise stated, all information and opinions contained in this publication were obtained from sources believed to be accurate and reliable as of the date published or indicated and may be superseded by subsequent market events or other reasons.

Risks include, but are not limited to, liquidity, credit quality, fluctuating prices and uncertainties of dividends, rates of return, and yield. Past performance does not guarantee future results. Investors should consult their Financial and/or Tax Advisor before making any investment decision.

Our Huntsville Office is moving. Starting October 24th, this office will be working remotely. Please contact your advisor for more information.